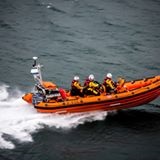 A man was airlifted to hospital early on Monday 12 June after capsizing in his kayak in the Kylerhea Straits.

A boat, the Helen Bruce, was passing nearby and managed to tow the kayak close to shore.  The man was spotted by someone onshore who waded out and then swam out for assist him, assisting the rescue which left the kayaker cold and exhausted.

Kyle of Lochalsh RNLI lifeboat was launched at 1:17pm, arriving on the scene at 1:27pm. The first paramedics had just arrived, and had begun to treat the male casualty who was hypothermic and exhausted after struggling in the water for a significant length of time after his kayak overturned.

A volunteer coastguard was also sent to the scene.

The casualty was winched on-board the helicopter at 2:20pm and flown to airlifted to Inverness' Raigmore Hospital by Inverness Coastguard helicopter.

The lifeboat was then stood down and returned to Kyle and was refuelled and made ready for service by 3:15pm.